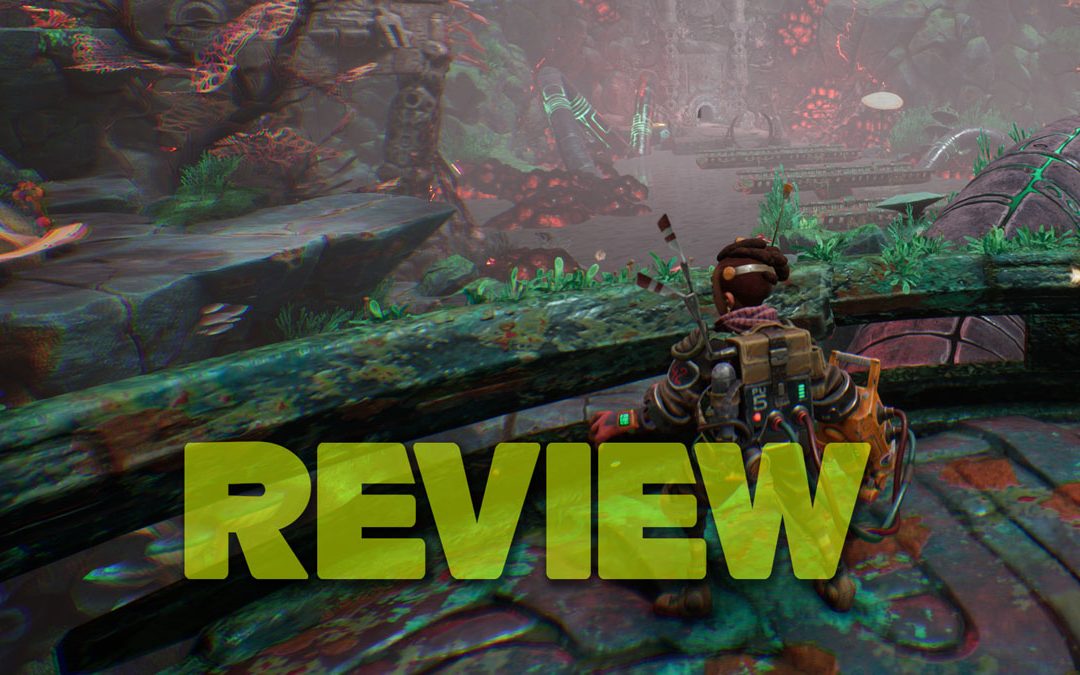 IF you were searching through the galaxy, visiting a strange planet. What would you hope to find? The Gunk is an 3rd person action-adventure game set on a planet this seems to be corrupt and covered in a black slime like parasitic entity. You play as Rani, a scavenger who explores this strange world to gather resources and hopefully find something of value.

The unnamed planet that you first set down on is filled with various biomes like jungles, caves, and canyons. Each of these terrains are corrupted by this black slime that Rani and her friend Beck name The Gunk. This slime is harming the environment and the wildlife that inhabits the planet. As you explore the planet, Rani is equipped with a mechanical power glove. With this glove Rani can suck up The Gunk and restore the land to a lush green environment.

However, as she restores the land, she uncovers something else, but what? There is a story to be told here, but what kind of story? As you venture further across the planet, you get to witness some of its beauty. Of course, you will need to remove the Gunk before you see it. Playing through the story, you happen upon some strange markings and structures. As though life seemed to have inhabited the planet years before.

Rani will also discover a creature that looks to be held captive and suspended in animation in a sleep chamber of sorts. Upon releasing him you find out that his name is Henri. He informs you that someone called ‘The Gardener’ is responsible to what is happening on his world. It’s here where Rani decides to help Henri free the rest of his kin. She also vows to fight back against The Gardener and hopefully restore the planet. However, can your relationship with Beck withstand this task and what will Rani have to do to save the planet?

When you first land on the planet it seems desolate and shows no sign of life anywhere. That is until you come across this Gunk. When you activate your Power Glove, you can suck up all the Gunk in the area. Once a particular area has been cleansed, it transforms into a lush green environment. This can then open blocked passages or allow you to reach higher points in the area. Rani’s glove also allows you to scan the environment for resources.

As you scan the world around you it gets documented, and you can then harvest what you have discovered. Each plant or mineral that you discover, will level up your tech and glove, unlocking new abilities. To collect these resources your glove will suck them up to store for upgrades later. These upgrades are done back at your work bench on your ship and will give Rani new abilities when out exploring. The glove can be used to fight against corrupted monsters.

Attacking monsters with your glove allows you to suck them up and throw them back against the ground, killing them. The glove can also rip up corrupted monsters that are rooted to the ground. There are also larger monsters to contend with, but these can be quickly dealt with by evading and using your Power Glove to remove their corrupted core. 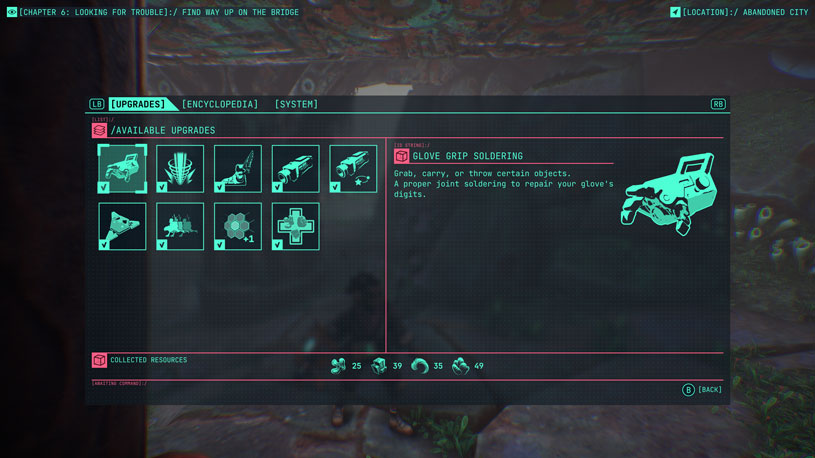 The Ability to Overcome

When it comes to the abilities that Rani has, there is quite a bit on offer to aid her. On my first playthrough I had unlocked 11 abilities, but there are more.  Once you get your gloves first upgrade to the last, each one makes Rani more adapt to the world around her.

Thankfully, all of them can be equipped and used together, so you never feel like you may have missed an important ability. Rani’s abilities range from her Power Glove sucking up The Gunk more quickly and giving her a boost of speed in the process. To the glove being able to shoot a thermal shot to stun enemies or hit switches to open doors. Another ability that Rani has is a decoy, where she can throw it and to attract monsters to it. Once activated it creates a large green bubble which allows you then to attach from the side or behind. She also gets abilities that will increase her damage resistance when in combat.

While the abilities on offer all have their advantages to them, I do wish there was a few more. The jumping in The Gunk is slightly misplaced in that it can be a bit finicky. If one of the upgrades was to allow for higher or longer jumps, that would resolve this. Another ability that is needed is an upgrade to the Power Glove’s sucker feature. When it comes to massive areas of Gunk, this ability needs a few more upgrades to help remove the Gunk more quickly.

Rani also has a beacon at her disposal that she can use to fast travel between different locations across the planet. Each beacon that she places can be accessed to visit a previous site or head straight back to the ship. These come in handy if you ever feel the need to head to your workbench for an upgrade or two.

I quite like the visuals and art style in The Gunk as it reminds me of Claymation with cartoon shading over each of the characters. It’s how the characters move about the environment and interact with it and one another.  The planet is beautiful with some amazing scenery set pieces scattered throughout, with the sun beaming through certain areas. Especially when it bounces off the Gunk, you get this beautiful purple ray of light that is just beautiful to see. The lighting effects in The Gunk are subtle, but effective, as you are wandering about in dark caves. For example, how the crystal formations that reflect light back into cave as your torch bounces of it. These are nice little touches as you venture through scouring for precious materials for those vital upgrades.

The same can be said for the transformation of the world around you when The Gunk is cleared. After clearing an area of Gunk, you get a burst of energy spring forth as a green bubble expands and explodes releasing life back into world. As you witness nature fight back and breath freely once more and you can roam about reaping the benefits. I do wish that the developers had implemented HDR as the visuals in the later part of the game would really POP! 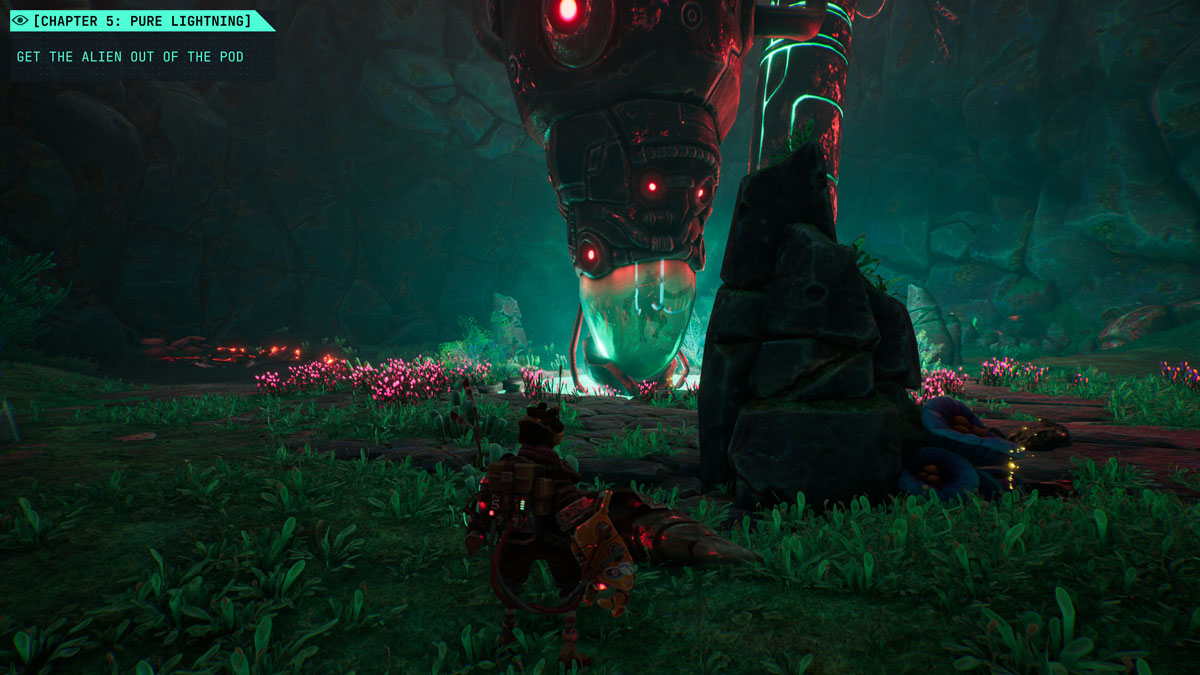 If you reach further through the planet you will come across a wasteland, that has reminiscences of the past. It’s here you get the sense of dread and despair yet still having its own beauty. Structures scattered and buried across the land telling its own story of failure. Yet the only light you see is the moon that bears down on you lighting your path to the end, but the end of what?

I really enjoyed my time playing through The Gunk (on second playthrough now), I did encounter some minor issues. One such issue was the Gunk monsters you encounter can sometimes be knocked off the side of a platform. When this happens you are left wandering about. You must restart from your last checkpoint and start fighting again. This happened maybe once or twice during the game and can be frustrating at the time. Also, you will notice during cut scenes that there a slight delay with the characters voices and lips syncing together. Like I said, these issues are minor and never ruined the overall experience.

The Gunk is a fun 3rd person action-adventure title which offers up something that is missing on the Xbox platform. It’s a journey of discovery and wonder with a sense of intrigue and mystery all rolled into one. It drops in some fun elements of platforming, puzzles and some light combat all wrapped up in an interesting story. While it’s not the perfect title, it gives you everything you need to enjoy the experience. I hope we hear more from our intrepid explorers in the future.

Xbox Series S ReviewWhen I first heard and saw the little brother to the Series X, I thought it look like a speaker or something that you could mount to your wall, and you don’t get an actual sense of the size of it until you have it right in front of you. The Xbox...
Read More
← Christmas Guide 2021 Sherlock Holmes Chapter One - DLC Out Now! →