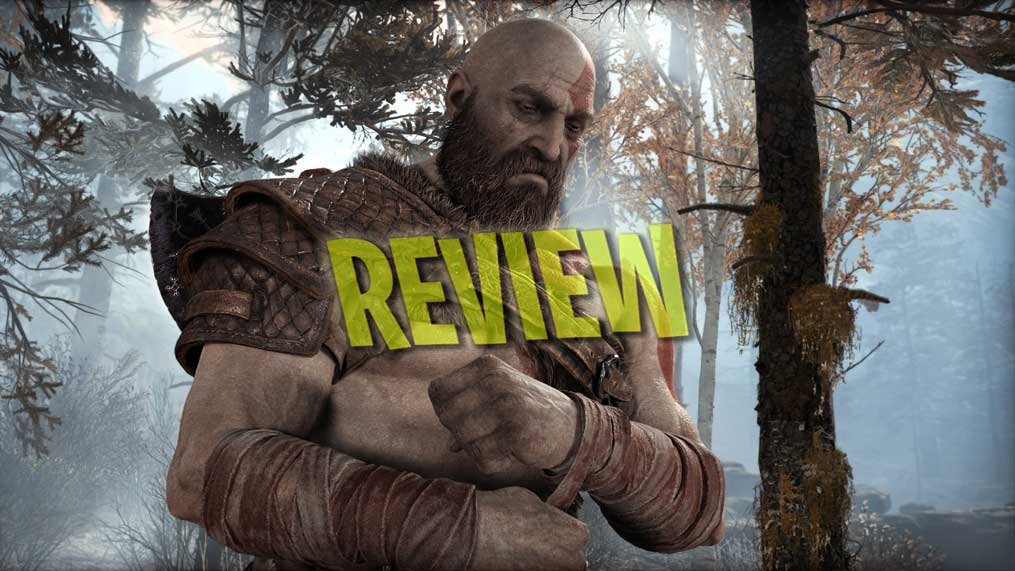 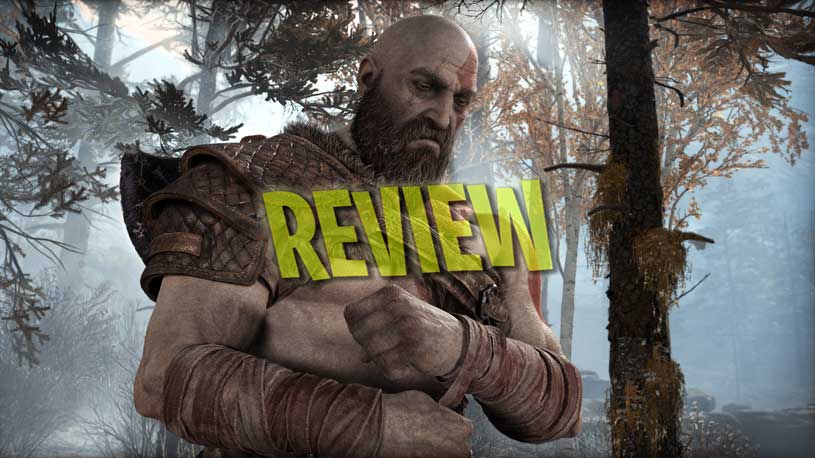 God of War has finally come to PC after what seemed to be an eternity, it’s finally here. The God of War franchise has moved away from Greek mythology and is now trying its hand at Norse mythology. Unlike most of its predecessors, the mythology takes a back seat to the main story arc. Instead, the story focuses on a bond between father and son, albeit a broken one.

In this latest game in the franchise, we see Kratos and son Atreus setting out to climb the highest mountain. They must journey here to scatter the ashes of his beloved wife Faye. Along the way we witness the uncomfortable bond between Kratos and Atreus. We also see how Kratos struggles to show any type of emotion when interacting with his son. Throughout the journey to the mountain, we see Kratos calling his son ‘boy’ rather than his actual name. Once he starts to open up to his son, he eventually starts calling him ‘Atreus’ sometimes instead of just ‘boy’. Yet, he is still remains as hardened as ever in other aspects. It’s not just Kratos that goes through some changes, as Atreus goes through much more over the course of the journey.

Atreus is first a little bit afraid of his father, but starts to fear him gradually, becoming more confident around him. It’s a nice touch to the story and an interesting one as you follow them both towards the mountain and to their stronger bond.

Atreus is not just some mini sidekick or tag along NPC in the game. As you progress through the game, he grows his skills in combat. As he grows he gains confidence, which in turn helps him learn new skills. This can help Kratos in the heat of battle. At the start of the game Atreus will just shoot arrows with the bow that his mother gave him. Eventually though, he learns more skills like knocking down enemies, strangling them with his bow and even doing a cool mid-air firing move. This adds something new to the combat in God of War and also adds more variety to the fighting mechanics as well.

When it comes to Kratos, he is just as ferocious as ever and with a brand new weapon, the Leviathan Axe and a shield. Combine these with his powerful fists and you get some truly satisfying combat. You can throw and recall the axe like a boomerang, as well as cleaving down enemies with it in the most brutal ways possible. The shield acts as a parry and counter system which can leave enemies open for even more brutal attacks. 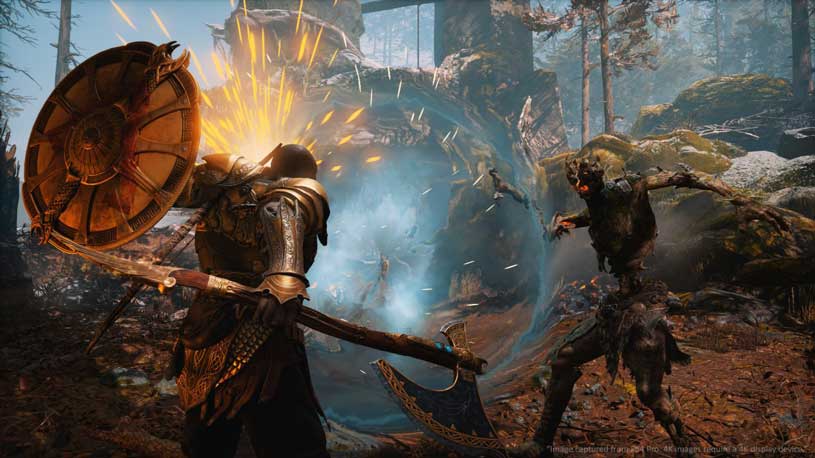 When Kratos is pummelling enemies with his fists, you get an option to do some over the top beatings once they are in a stunned state. With a press of the RS stick, he will rip into their rib cage or pull of their horns/jaws and whatever he can get his hands on to finish the job. Showing how the mighty Spartan is alive in him. Compared to previous God of War games, the combat has evolved more and thankfully this time, the camera puts you closer to the action. It’s challenging and satisfying at the same time and thankfully with evade and quick turn moves, you never feel like you are too overwhelmed by enemies around you are getting attacked from all angles.

What I also love is the more organic feel to the levelling up and XP that is earned in the game while you play. With earned XP comes the goodies and what can be unlocked and upgraded. The XP that you earn feels more natural and can be earned by killing enemies or Atreus and Kratos discovering new landmarks and messages on walls. The XP you earn in the game also allows you to upgrade your abilities and unlocking new ones. While levelling up Kratos to be even more of a badass with his new moves, it’s also the weapons and armour that can make him feel like an unstoppable force. When you first start out you have basic leather armour and a simple axe. 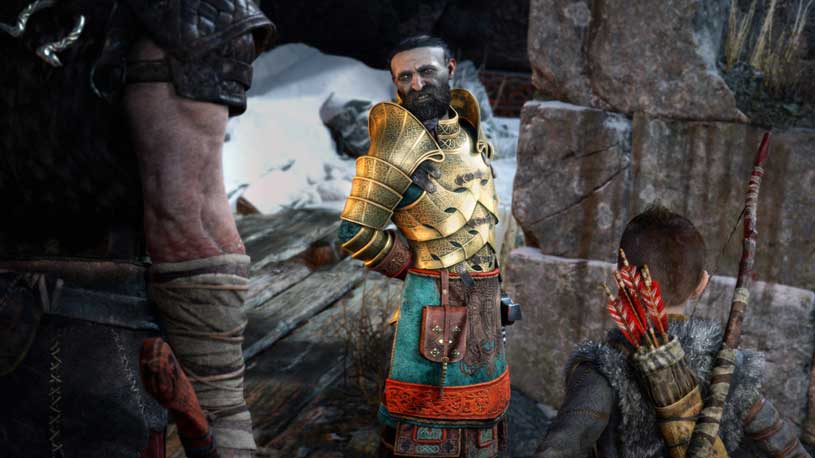 As you progress through the story, you can upgrade and buy better armour pieces, as well as upgrading your axe. The armour you can purchase comes in three different categories; chest, wrist and waist. Now depending on what stats suit your needs and playstyle will determine what armour you choose. Each different armour has their own style and own rune (enchantments) sockets, which grants you more defence, health or quicker cooldowns. There is quite a few to choose from when you find the runes scattered about in the world, if you explore it. Atreus’s armour can also be upgraded, but unlike his father, his armour is just a single piece and it’s simple to upgrade. Atreus armour can be bought from shops by spending the required materials for the upgrade.

When it comes to upgrading your axe, you can choose what way the blade is upgraded or what why the handle and pommel of your axe looks like. Each upgrade on the axe can also help increase your strength and power and unlock new moves or perks for your weapon. New to God of War is the Runic Attacks and Summons, these are special abilities and moves that you can unlock for special moves and skills. Each weapon can be equipped with a unique Runic Attack, which then can be performed by pressing LB+RB or LT+RT, depending on whether you want a light or heavy Runic Attack.

Atreus Runic Attack can be used by pressing the square and like Kratos Runic attacks, they need to be charged to be active again. If you want to use Atreus’s Runic Summon, you can press square. All these special attacks can be used once they are charged. So be careful when you choose to use them and only use them only when you really need them.

Adding to your powerful axe and Runic attacks, Kratos has Spartan Rage. This can be filled up by performing attacks, and is activated by pressing the LS and RS buttons simultaneously. When in use, it does prevent Kratos from using the Leviathan Axe. While in this induced rage state, Kratos uses his fists, but grants him bonus damage, slight speed boosts and he takes lesser to no damage. You will see his fists covered in fire as his standard attacks are replaced by a much stronger basic attack and a jump-and-pound slam attack, which is great for knocking enemies back.

While Spartan rage is active, it does fill your health bar with each hit that connects to an enemy. You also get a cool reddish hue on screen as you pummel enemies in front of you. It can also be deactivated by pressing the LS and RS buttons again, so you are not forced to use it all at once either, which is great, since some games force you to use until it’s fully depleted.

The world of God of War is a more open-world approach while not being too overwhelming at the same time. Some of the environments in God of War are simply breathtaking. Whether it’s the sun piercing through the trees scattering light in all directions or hearing twigs snap on the forest floor as you walk over them. Santa Monica Studios has done everything to fully immerse you into this new world.  While the landscapes and environment in the game is nothing short of amazing, it’s Kratos himself that stands out too.

Every little detail from the marks of war on his body to his gruff rugged beard all received the same love and attention as the rest of the game.  It’s not just the looks that are better than ever. The soundtrack definitely compliments the games narrative with the Nordic string instruments working in harmony almost dancing with the stunning visuals.

My only gripe is my own hardware! I was able to run God of War with a GTX 1660 Super. However, it still wowed me in the visuals department. I will be revisiting this game when I get a much beefier GPU and messing around with the graphics settings even further.

When you are not getting lost in how amazing the world is around you. You will want to explore the world as much as possible as there’s always something to discover, whether it’s a hidden temple or cave. Exploring the world is also the best way to grab upgrades and find better armour and runes to increase Kratos power and abilities. You can also find chest puzzles that need to be completed in order to unlock them. Inside these chests are upgrades for your health and Spartan Rage meters.

These puzzles, while not the most challenging ones you will come across, do make use of your skills as well as Atreus. To add to this, there are quite a few tasks or side quests thrown in, like finding and completing treasure maps and trying to complete challenges. 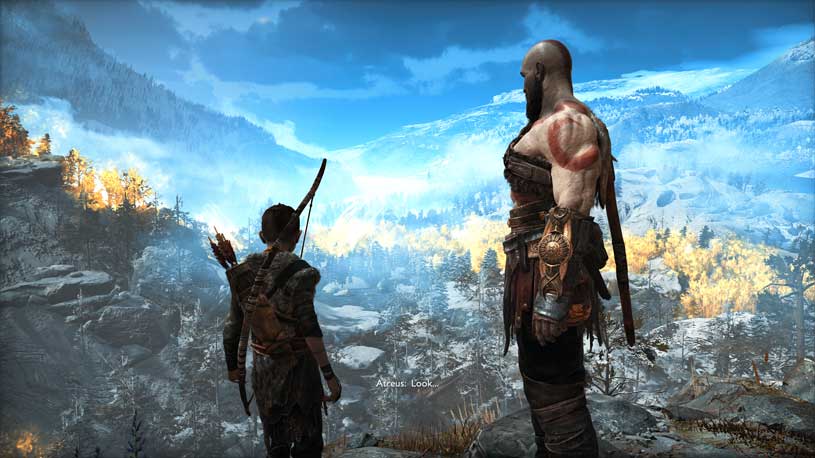 Santa Monica Studios should be proud of what they have achieved! Especially now that on PC we get to use an Xbox controller. This game is pure joy and something of a masterpiece, from the story to the combat and the beautiful environments. It has it all and definitely a game defining moment for me and one of this generation. While I did experience a few nuances during my gameplay, it didn’t detract my overall experience. With that being said, it’s going to be hard to beat this game on any platform! All other developers… Take note!

Genre Puzzle, PlatformerRelease Date December 17th DecemberPublisher Untold TalesPlatforms Xbox, PS, PC.Aspire: Ina's Tale ReviewIn Aspire: Ina’s Tale, we start with a girl locked up in an imposing structure that she must escape from. With each step you take a mystery...
Read More
← Rainbow Six: Extraction Review The Wonderful World of Tinykin →